Last weekend, Dono and I made the trek to Oak Cliff to to try out a new restaurant – Dallas Grilled Cheese Co. 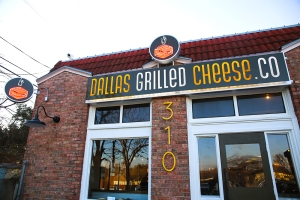 [Image is from D Magazine, Side Dish Blog]

A few weekends ago, I was in Bishop Arts with my friend Meredith, when we stumbled upon the restaurant. Much to our chagrin, it was not yet open. Sad day. So when I saw on Facebook it had finally opened, I knew we had to try it!

Well…to be honest…we actually tried to go the weekend before for lunch with another friend, but the restaurant was having some water heater troubles and closed for lunch. As disappointed as we were, we waited out and finally got to go last weekend.

We showed up about 1pm on a Sunday afternoon – hoping we would miss the church crowd. We were wrong. This place was PACKED. The hostess told us the wait for 2 people was over an hour and a half. SERIOUSLY! We decided to wait it out because there weren’t too many people waiting and figured most of them left to go to other restaurants in Bishop Arts.

Luckily, 2 spots opened up at the bar, and we snagged them before anyone else. Since we had had a few too many margaritas the night before, we opted not to have any alcohol, but other than beer and hard liquor drinks, there were a couple cheeky mixed drink options that looked pretty good.

We started off with the Fried Mozz – Aka: Fried Mozarella. It was dang good. But really, can you even mess up fried cheese?

For lunch, I ordered the JK’s Favorite sandwich. I don’t know who JK is, but the sandwich was tasty. It was American, Cheddar, and Gruyere cheese, bacon, and dijon mustard on a parmesan crusted sourdough. YUM. I also ordered the fries.

Dono ordered the Spicy Two-Pork and Cheese sandwich which was ham, bacon, swiss and cheddar, with honey compound butter and spicy jam on a grilled sourdough bread. I didn’t taste his, but he said it was delicious. He ordered chips.

While the food was really good, it was also a huge portion. Between the sandwich and fries, I couldn’t eat it all and had to take a to-go box home. I really wanted to order the JK Sweet Grilled Cheese (grilled brioche, peanut butter/cream cheese/honey mix, banana slices, marshmallows, and hazlenut spread), but alas, there was no room left in my belly. May be for the next trip!

Overall, I definitely would go back to visit. While the service was a bit slow and the place was packed, its obvious people from around the city are all wanting to check it out. I probably won’t return though until its been open for while, mainly because it is so far from our house now. Hopefully we’ll be able to return soon!

One thought on “Grilled Cheesus”